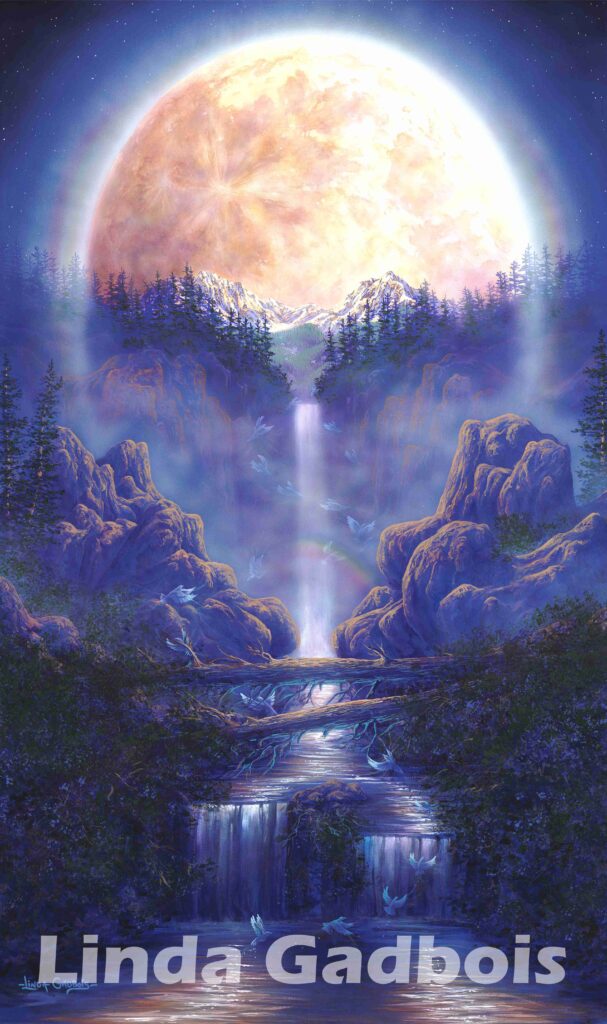 In all symbolic imagery and composites, every aspect of the details used to compose it is meaningful to the overall idea. Nothing is added without thought and significance. Most images come as an “inner vision” that’s complete in nature, as all spiritual ideas or archetypes are, and simply needs to be developed in order to produce as a work of art. When ideas are communicated using symbolic imagery they require each individual to interpret it in order to form a unique idea out of it. How a person intuitively interprets it depends on a combination of factors, such as their esoteric education and ability to understand spiritual principles, their maturity level and life experience, and the conditions and circumstances they apply them to as a form of working concept. I’m simply going to point out the significance of the symbolism with very brief descriptions to allow you to form your own interpretations as a form of “personal creation”. This way, you can put it together in whatever way makes most sense to you and seems most relevant.

Overall theme: The three aspects and levels of the soul and mind, and how they create a “whole reality” that spans multiple dimensions (inner and outer, and upper and lower).

Full Moon = the Higher consciousness of the Soul on a higher (cosmic) plane, that descends into the lower plane, giving birth to the subconscious (instinctual mind), which in turn births the self-conscious aspect of the mind. The Moon is the planetary (heavenly) body that influences and directs the instinctual nature of the animal body (subconscious) and all of Nature.

Chalice and Egg: The Moon forms the overall shape of an egg as an aura that’s nestled within rock outcroppings (mineral kingdom) in the shape of a chalice, which represents the shape of the essence that permeates, envelopes, and emanates from the body as its aura. The mineral body serves merely a vessel or vehicle for the Spirit and Higher Soul to express and create itself within the physical plane.

Duality of Polar Opposites – there’s a sense of symmetry and duality as complementary opposites of the same thing throughout the image. As Higher Consciousness enters the lower plane, it divides and separates into polar aspects of itself as the means of creating the illusion of both an inner and outer reality of the same nature. The stream of consciousness flows through the center of polar aspects that mirror each other and work together to produce a functional whole.

The Moon’s aura emanates the 7 colors of the rainbow, the hidden, inner nature of light as the hierarchical structure of the subtle body. On the higher level of the astral plane it appears as real, whereas on the lower plane it’s an invisible essence or “hidden inner nature” of astral (sun) light. The sun’s light appears invisible until refracted off of moisture or dust, where it becomes a visible essence (rainbow) and material form of some kind.

The two mountain peaks represent higher knowledge as the dual masculine and feminine aspects, as do the two treed slopes that form the crevice for the “stream of consciousness” (waterfall) to flow into the lower dimension. The cliff and waterfall represent the void between higher and lower dimensions as the “fall of man” into a lower, unconscious existence of animal instinct driven by emotional impulses. As it enters the lower regions of the Astral plane, it flows under a rainbow at the base (lower sphere), and divides into two streams (subconscious and conscious mind), that flow into the same pond that make up the same reality.

The 2 rock pillars – the stream (of consciousness) flows through the center of two rock outcroppings, symbolic of the Esoteric pillars of “Jakin and Boaz”, representing the subconscious and self-conscious aspects of the inner and outer reality of the material plane, which are formed by the same higher mind. The stream passes under two logs that act as a bridge, connecting the two shores of the material mind as the brain and heart, and right and left (masculine and feminine) hemispheres of the brain. The logs are separated representing parallel planes of a higher and lower nature that connect the shores of the same body of water.

Waterfall and Creek – The illusion of water descends from the higher plane in the form of an astral, ghost like mist that forms the etheric substance as the template for material reality. It begins as a single stream that then divides into two branches that flow into and form the same pond. This is symbolic of the Higher Conscious as a unified state that descends into the lower plane as the subconscious which then systematically births the self-conscious mind within the material plane. Together these two aspects of the lower mind form what we perceive as a “material reality” that’s both of an inner and outer nature. The Moon light, which is produced as a reflection of the sun’s light (lower mind of the material plane doesn’t have its own light), is reflected off of the water as the higher consciousness informing the subconscious mind of the lower plane, which then reflects it in the mind’s eye for the self-conscious to witness as a part of the outer environment.

The misty fog like substance that the stream flows into is the astral light or primordial substance of the material plane that forms the etheric body as a form of holographic blueprint that provides the spatial substrata for organizing material form. The rainbow at the base of the stream represents the hierarchical structure and inner nature of light that forms the subtle body. Spirit, as the higher soul and mind, operates and expresses through the material body (plane of existence) through the subtle organs of the etheric body as the 7 major chakras of the body that produce a chain of association with the endocrine system and major organs of the body. Thought organizes Astral Light as ghost-like essence into material forms in the imagination that it then magnetizes with personal will forming an inner vibration that becomes the basis for producing an equivalent outer vibration.

Doves – arising out of the light reflected on the surface of the water represent the air element of the Holy Ghost or Spirit, that ascends back up to its origin in a dual spiraling movement, much like the Life-Force energy of the body flows in a serpent-like motion from the base of the spine to the crown of the head in order to arouse and excite creative thought (masculine) within the imagination (feminine) (egg and sperm) as the means of creating reality and the self.

Indigo – The overall color scheme is indigo, which is the color of the 6th chakra of the 3rd-Eye. The intuitive imagination that collapses the wave of incoming consciousness around a single possibility that has both an optical and audio aspect that together form a coherent reality of the consciousness it acts as a vessel for.  The Moon is the complementary color of goldish yellow, showing that its complementary aspect within the chakra system of the body is the solar plexus, as our “center of being” formed from translating the idea of the incoming information into a thought that stimulates its emotional equivalent as the chemistry and state of the body which then manifests reality.

The rest, you can imagine and interpret on your own. Some of your interpretations may be different than mine, and that’s fine. That’s the way it’s supposed to be. Symbolism forms a unique interpretation as an original creation each time it’s interpreted by different individuals, and sometimes even by the same individual at different times or while in different moods or frame of mind. Each interpretation is not only a personal creation of the individual based on what the symbols mean to them, but is also ideally suited to them in terms of the “knowledge” acquired from it. The universal language of symbolism and metaphor is creative in its very essence and serves to constantly form new variations of a thematic idea, of which no two are alike.