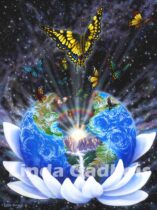 In all symbolic imagery and composites, every aspect of the details used to compose it is meaningful to the overall idea. Nothing is added without thought and significance. Most images come as a “vision” that’s “whole in nature”, and simply needs to be developed. I’m simply going to point out the significance of the symbolism with very brief descriptions to allow you to form your own interpretations as a form of “personal creation”. This way, you can put it together in whatever way makes most sense to you and seems most relevant.

Overall theme: All transformation is an inner process.

Earth = material reality as the outer shell that houses the inner spirit. It’s in the form of an egg, cracked open, allowing new birth from within as a spiritual resurrection.

Sunrise = the inner light, over a rugged mountain peak (higher knowledge), that draws its vitality from the “inner well” – waterfall – that together, nourish and sustain the eco-system, water (vitality) and light (consciousness) being the very substance of all life.

Light and water when combined, produce air as the astral plane (atmosphere) and etheric substance, represented by the sun’s “rays”, produced as a reflection of moisture, that blends with the nebula-like gases of the space surrounding it = the astral substance that forms all material bodies.

There are 13 rays of light, 13 butterflies, and 13 petals on the Lotus blossom. 13 being the number of death and transformation, the cycles of the Moon in a year, and the “master” who is the culmination of 12 disciples or archetypal aspects of the zodiac, which are the means by which it “reformulates” itself. What we consider death as the death of the body, is what frees the soul to reside within its true domain, so it’s actually a form of birth into a new realm of existence that’s void of physical limitations.

13 = 4, the number representing the law of material reality (Tetrad), and the Tetragrammaton as the formula for transformation as new manifestations produced willfully through “mind over matter”, and the 4 states of matter > charged plasma, gaseous, liquid, and solid.

The Earth is a cracked egg, 2 halves as the dual nature of the soul, the mind, and the brain and heart, bridged and connected by the rainbow – revealing the hidden nature of light as multiple frequencies that form a single unit that always flow in a circular motion, only half of which is visible.

The overall shape of the Earth and Light form a Monad – the sphere of consciousness as a field of information that demonstrates the soul’s relationship with the mind and body. The core (light) exists as the kernel or brain that forms the membrane or outer sphere as a projection that’s an emanation and complementary correspondence to the inner world, which is what’s producing it.

The Lotus = symbol of the feminine soul – originates and has its roots in the dark under the water (subconscious), and grows towards the light of the sun, blossoming above the surface, while remaining rooted in the mud (Earth). It has 13 petals, and symbolizes the stages of unfolding and blossoming into full maturity. Life unfolds through stages and steps of growth and development.

Butterfly = the true symbol of transformation, not only changes shape, but transforms into an entirely different species with a completely different biological make-up and structure. Its physical body turns to mush, and its substance reconstructed into an entirely new form where it goes from crawling on the ground, totally earth bound, to flying through the air, becoming heaven oriented, and scaling the higher regions of the lower plane. Butterflies, like birds, are symbolic of the air element, the combination of both fire and water as its offspring or unified state, and is the complementary of the earth element as it’s higher, less dense aspect. There are 13 butterflies, one greater and central, 12 lesser and at different levels as the 12 archetypes of the zodiac that we use to reformulate ourselves in terms of qualities and characteristics.

Air Element = the astral substance and magnetic fluid (nebula) that’s used to form the etheric body as a holographic model or blueprint for constructing the material body as it’s “twin”, or reverse (mirror) image (represented by the Tetrad). All transformation of the material body comes by way of altering the etheric body, produced by will, thought, emotion, and the imagination . . .

Space represents the gravitational substrata that holds everything together in a stabilized and revolving fashion, and is infinite, unchanging and eternal in nature.

Stars = astral substance that emanates light is the basis of “matter” (photons) as formed, low density light that shapes all material form. We are ultimately all made of stardust, and our psychological make-up the unique combination and degrees of constellations as archetypes of the zodiac, with 12 representing a whole unit of time (celestial cycles), and 13 being the one that naturally evolves out of them and resides in eternity outside of time.

Overall: All transformation as spiritual rebirth within the physical body takes place from the inside out. Work on the interior as the core or essential self to change the formula of the etheric body, and the outer manifestation changes accordingly as its expression and offspring. It’s the mental paradigm we employ and act to develop that provides the basis for constructing our material body and perception of reality. It’s only by changing it that we change ourselves and how we create and experience reality as a result. All of what we think of as reality is actually a product of the mind as a perception and mental construct.