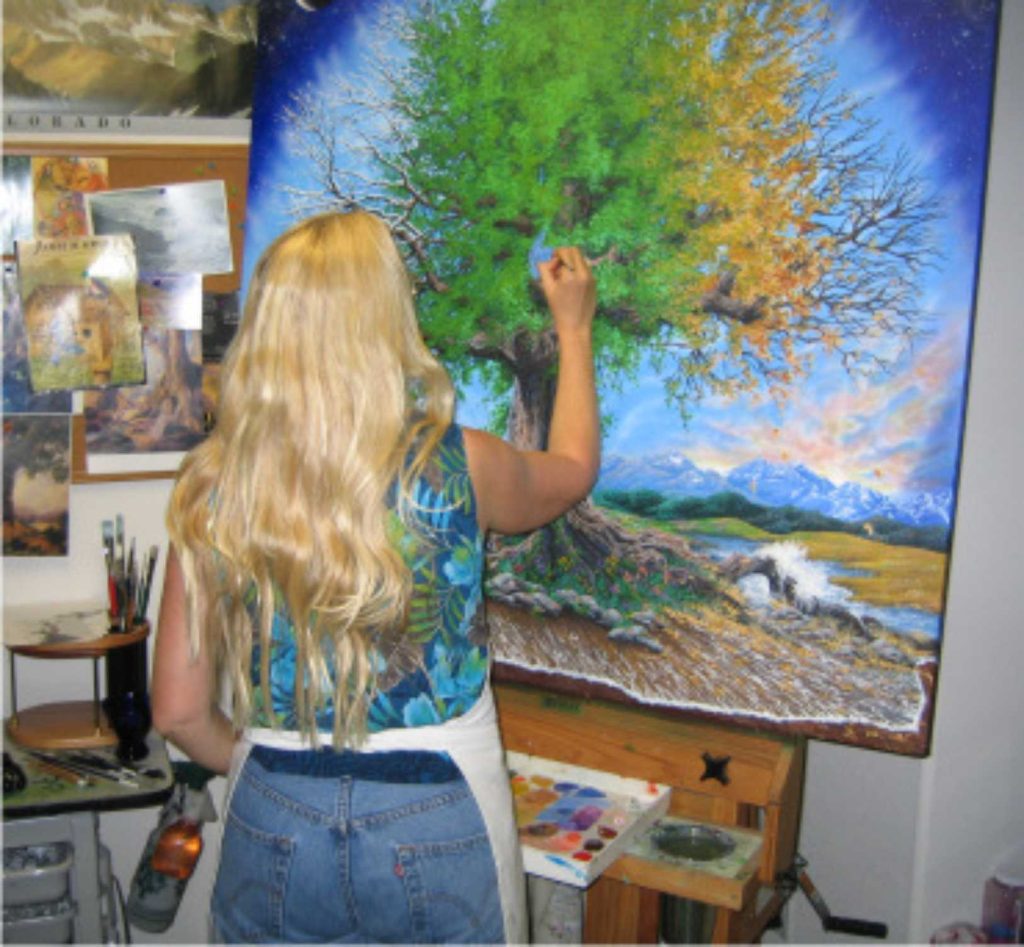 I was born with a natural love for Nature, animals, and the great outdoors, and as a child would walk around the neighborhood or visit nearby parks with a stationary tablet or butcher paper and a pencil drawing whatever captured my imagination along the way. I would sit for hours drawing flowers, leaves, bugs, trees, and whatever else that seemed to intrigue me or have an interesting design. I also had a natural love for writing poetry and photography and would write poems or rhyming verses and then illustrate them using pictures I had taken and collected along the way.

I began realizing at a young age that by concentrating on an object in a single-minded fashion while trying to capture its beauty and essence that it was as if I became one with it in mind and spirit, and as a result, seemed to come to know it intimately. I began realizing that concentration and studying something in detail was the means for entering into and becoming of the same nature as whatever it was I was focusing on intently, and while doing so, I intuitively came to know its spiritual essence. Due to this intrinsic intimacy with the natural world around me, I’ve always felt best when out in nature and communing with the natural world. This led to a lifelong passion for hiking, camping, backpacking, photography, and traveling, where I’d take hundreds of pictures that I then used for building the resources I needed for drawing and painting.

As I became older, I had access to painting supplies and began painting every chance I had. I can remember every Christmas and birthday asking for art supplies as gifts. I was raised by a single mom with 5 kids, and lived my childhood in poverty, so art supplies, even basic ones, were hard to come by. I entered art contests at a young age in hopes of winning art supplies, while participating in all the art events at school and our community center so I could practice painting while receiving some form of instruction. I didn’t have anyone to teach me how to draw or paint, so I had to teach myself by checking out books from the public library, and simply trying to paint on my own. By the time I was in the 3rd grade, my drawings and paintings were selected to be shown in regional art shows at our local Art Center, and I slowly became recognized as being talented with worthwhile artistic abilities.

As I got older, I would babysit, do yard work, shovel sidewalks, iron clothes for the neighbors, or do whatever I could to make money, and I’d walk down to the art store and buy supplies. I bought books on “how to paint”, small board canvases, a basic set of oil paints, and set up the ironing board in my bedroom where I’d prop up a canvas against the wall, use a baking sheet lined with parchment paper for my palette, and began practicing diligently for hours at a time. I would enter art contest whose prize was art supplies as a means of trying to get the supplies I needed to practice. I won an art contest around the age of 12 that provided me with a variety of art supplies that included watercolors, pastels, and colored pencils along with drawing pads of several different types of paper. This seemed like a treasure to me at the time and I began practicing using several different mediums.

Later, as a teenager I pursued a 2-year degree in Commercial Art and Advertising at a community college which included a few fine art classes on basic techniques, but continued painting and drawing on my own, so in terms of fine art, I’m primarily self-taught in the most basic sense. I started painting mostly landscapes, while occasionally including wildlife, and then progressed to focus mainly on wildlife set within scenic backgrounds. By the time I was 30 I had opened my own Sign and Graphic Design Firm, which evolved over a 10-year period to mostly illustrating, which allowed me to live in the mountains of Colorado. I established myself as a Wildlife artist in the early stages of my art career and went on to win several multi-state and national art competitions. The mid 90’s was a stage in my life where I began focusing on and seriously contemplating my spiritual growth and path in life, and it moved me into a whole new realm of thought and imagining. I became involved in aiding organizations that helped women transition out of abusive situations, which led to painting a body of angelic images in which I donated all money from the sale of prints to these organizations. This became my first attempt in working with the human figure, and I utilized my photographic skills by posing for all my own images.

As I progressed in my art I submitted 2 portfolios to national publishers, one wildlife and the other angels, and was immediately contacted by both. My intentions were to go with a large publisher so I could concentrate on painting and not have to deal with the business and marketing end of it. But then, once engaged, I received a “promo packet” that laid out all the rules, popular colors, attributes, and subject matter I needed to paint over a 5-year period, and this caused me to hit the brakes while rethinking the process I was committing to. I was informed that whatever you “enter the market” as (wildlife artist, angel artist, etc.), you’re slated to that genre’ and you can’t change your subject matter or style in how you handle your subject matter after that because people need to “know what to expect”. It basically removed every bit of actual creativity and artistic growth from the equation, where I was being instructed on what to paint, based on what was “popular and would sell”. So I backed out of all those negotiations and decided I needed to pursue a different path.

Over the next couple of years, I began going through a form of identity crisis in terms of my creative work, where I felt as if I was always engaged in a form of copying what already existed, whether from a photograph, combination of photographs, or actual scenery. I had developed a style of painting with such life-like detail that the process became tedious and mechanical, causing me to lose interest halfway through the process. I became overwhelmed with a feeling of not knowing “what was mine” in terms of truly creating a unique body of work. What was it that I could paint that was truly my own creation and unique to me? It then dawned on me that whenever I meditated or concentrated deeply on an idea, that a symbolic image would form in my imagination that seemed to represent the idea as a form of metaphor, and I realized I had found my answer. Then the challenge became putting it together without an actual photo to go by, which developed my creativity and ability to imagine things even further. I had to figure out how to capture these imaginary images with detail and sensation. I had to form a memory of each aspect so I could replicate it.

This led to my latest body of work, which I refer to as “Visionary”, which is primarily symbolic and metaphorical in nature, and combines all the areas I developed through the different stages of my artistic growth. They combine landscapes and natural elements with wildlife and the human figure. I then began focusing on special effects and lighting as a means of capturing what existed as a purely imagined concept. I developed this part of my creative work along with the spiritual unfoldment that I was facilitating through devotional study of spiritual, esoteric knowledge and higher forms of intuition in forming a deeper understanding of the universal principles involved. I realized through this endeavor that all spiritual knowledge used to be communicated through art and architecture, and that higher forms of consciousness came by contemplating symbolic images that gave us deeper insights into the internal nature of things.

Symbols are the universal language used to express laws and principles that form the very fabric and energetic substrata out of which reality is formed, held in place, and maintained in a consistent fashion as a “mental state”. Symbols are living intelligence’s” that serve as archetypal seeds which, when concentrated on while in a mentally passive and receptive state, begin unfolding in your imagination as a chain of associated ideas and correspondences. Each time an idea is contemplated it forms in a unique and somewhat different way as a visual concept. Symbols require “interpretation” in order to be understood for the knowledge contained within them, and conform to the individual mind conceiving them as a “personalized version” of a universal concept. This is the basis for drawing on universal archetypes as a means of creating within your personal life. By creating images that are symbolic composites, I was able to simultaneously promote personal creativity in anyone viewing and contemplating them, and by promoting creativity as imaginary processes I was able to help others cultivate higher consciousness as a form of individuality, where each interpretation comes as a personal creation.

My Visionary body of work is meant to be contemplated while in a relaxed and receptive state, where you simply sit quietly while taking in the images and allowing them to take hold in the fertile ground of your imagination, allowing them to begin spontaneously unfolding and growing into a whole series of dynamically correlated ideas that bring deeper realizations about the true meaning and significance of the idea represented by the piece. By mentally entering into and becoming one with an idea while also relinquishing all need and desire to control how it expresses, it comes alive within your mind as a spiraling motion that expands into a dynamic series of correspondences and analogies, revealing the hidden secrets contained within it. Symbolic images are the universal language of the soul and what has been used for thousands of years to convey spiritual wisdom.

I have provided a few articles designed to give you a starting point on how to interpret symbols and composite images, that will allow your own unique correlations and imaginative process to begin unfolding. I think of these as the “water that primes the well”, and are only meant to set the process in motion, and should not be viewed as limiting or fixed, or as the only interpretation there is. The idea is to form your own imaginary processes as a means of cultivating your own individuality through forming unique thought processes.

If you’re interested in exploring deeper knowledge into spiritual sciences, esoteric subjects, and the mind and higher forms of consciousness, visit my other website which has hundreds of articles on various subjects and the educational and mentoring services I also offer:

For products and tools for enhancing your spiritual practices, for making your own personal care products, and for enhancing health and well-being, visit my store at: